Synchronized crop emergence is essential to maximize yield and profit

Synchronized crop emergence is essential to maximize yield and profit

As part of the 2019 AGCO Crop Tour, farmers in the Ukraine have been learning how important it is to achieve uniform seed germination and crop emergence. Plot results showed that corn (maize) that comes up even one day later than the first emergence in a field can cut yield by one fourth, while corn that emerged one week late suffered a major yield reduction of more than 70%.

To maximize yield and profit, uniform seed germination and crop emergence is essential. Ideally, each seed should germinate and emerge on exactly the same day and time as the next seed. While unlikely to occur with 100% of plants in a field, farmers can influence factors during planting to ensure good, even emergence. As part of AGCO’s Crop Tour program in the Ukraine, farmers were shown how they can impact seed germination and crop emergence, and how planting technology can be used to gain more uniform plant emergence. The program was hosted by Massey Ferguson and featured Massey Ferguson planters equipped with Precision Planting’s DeltaForce® and SpeedTube technologies.

When the crop emerged, different colored flags were used to mark plants that emerged on the first, second, fifth and seventh day. The flags allowed the team to follow each plant’s development and measure results. The team then hand-harvested ears and counted kernels to estimate yield, noting the relationship between early and late crop emergence and the adverse impact late emergence has on yield. 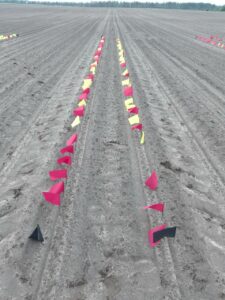 From left to right in each photo: corn (maize) ears representing emergence on days 1, 2, 5 and 7.

The field day ended with an open discussion on how to use technology and knowledge to influence seed germination and crop emergence. Farmers saw how they can maximize yields by setting up the planter correctly and using systems like automatic downforce and other Massey Ferguson planting technologies. 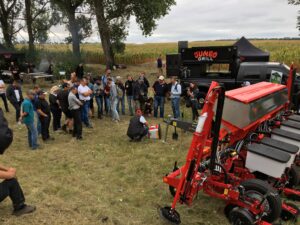 Attendees learn about advanced planter technology from Massey Ferguson at a 2019 Crop Tour event near Kiev.

Mark helps organize the Crop Tour program in Eastern Europe and is experienced at demonstrating the agronomic value of technology use. He has managed the agricultural activities on AGCO’s Future Farm in Zambia for the past 6 years. Connect with Mark on LinkedIn.