AGCO Crop Tour: 4 Ways to Increase Maize Yield at Planting in the Ukraine

During the 2018 AGCO Crop Tour, we conducted crop establishment on-farm research in the Ukraine over the course of 1 year. In this post, we show 4 ways to increase maize yield through precision planting.

AGCO Crop Tour: 4 Ways to Increase Maize Yield at Planting in the Ukraine

During the 2018 AGCO Crop Tour, we conducted crop establishment on-farm research in the Ukraine over the course of 1 year. In this post, we show 4 ways to increase maize yield through precision planting.

During 2018 AGCO has conducted crop establishment on-farm research in the Ukraine. The report below provides the results from 1 year of research in the Ukraine. The study will be repeated in future years with the intention to combine it with information from other locations in, Russia, Germany, Switzerland, South Africa, and the United States, to understand the importance of planter settings and their effect on Maize growth, development, and ultimately yield. The results below summaries the findings in the Ukraine for 2018.

The results from Crop Tours in other regions can be viewed at https://myfarmlife.com/category/crop-care/agco-crop-tour/

The research focused on the uniformity of plant emergence and spacing. Maize is very sensitive to competition, even from itself, so plants become disadvantaged when they emerge late. The research showed plants that emerge one or two days late compared to their neighboring plants yield 20% less. In a 10t/ha crop, this translates into a 2t/ha loss. Plants that are one leaf collar behind by V6-V8 were observed to produce a Maize cob roughly one half the size of its neighbors, and plants two or more leaf collars behind will produce no cob. Similarly, it is important to eliminate doubles (where two seeds planted close together), because this introduces unnecessary competition between plants, which reduces cob size. Worse still are skips (no seed planted) as this translates into zero yield. The loss of 1,000 plants per acre equates roughly to a loss of 150kg/ha.

The research showed it is important to focus on the following 3 areas to achieve uniform emergence. 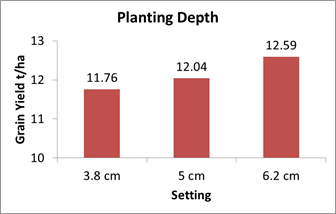 Critical to achieving uniform emergence is planting depth. Planting at shallow depths resulted in significant yield loss, because the soil moisture was not consistent, which resulted in inconsistent moisture uptake by the seed and uneven emergence. Planting at depths of less than 3.8cm lead to poor nodal root formation, reducing root mass and subsequent yield. Seed planted at 6.2cm produced the highest yield because planting conditions were relatively dry and moisture in the soil was consistent below 5cm.

Tip: To achieve even plant emergence and maximize yield, make sure individual row units are calibrated and adjusted to plant the seed into the soil where moisture is consistent. 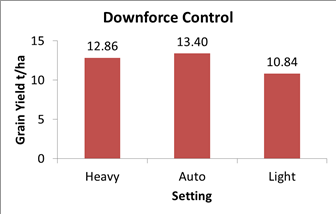 Downforce control is something that is often neglected, with few agronomists understanding how critically important it is. Too little downforce and the row unit will bounce leading to uneven depth control. Too much, and root development can be restricted, leading to a root system that follows the seed trench.

Our studies around the world show there are many factors that influence the amount of downforce required to ensure consistent planting depth. Soil texture, soil moisture, planting depth, row unit position on the planter bar, tillage system, accessories like coulters or row cleaners, and planting speed, all influence downforce. It was extremely interesting to learn that higher planting speed requires more downforce to maintain uniform seeding depth.

Given these planter variables, there is no standard setting for downforce. Downforce needs to be controlled on the move as the planter plants seed.

Our study in Ukraine proves it is much more detrimental to have too little downforce than too much. The small yield difference between heavy and automatic downforce was surprising since heavy downforce caused the planter depth wheels to compaction soil, which restricted root development.

Tip: Be sure to apply adequate downforce to avoid planter row unit bounce. In our study, we lost 2.56t/ha of Maize yield because of row unit bounce, which meant the planter was not planting the seed at a consistent depth. At $150/t and 200 hectares, that’s an additional $76,800 that could be gained every year by using DeltaForce. 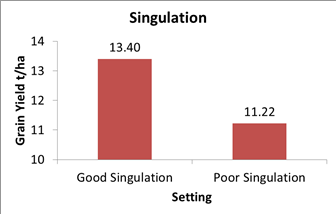 Seed Spacing Uniformity is at the centerpiece of planter performance. Our research was a little different than has been done previously. We used the same grade of seed the farm would normally use, but reduced the vacuum on the planter to ensure misses (skips) and doubles (two seeds planted). This allowed us to plant a poor singulation area of the field with an average of 85.7% poor singulation, vs. the control at 95.2% good singulation. The showed how the dramatic impact skips and doubles can have on yield.

Tip: Check and maintain the vacuum system on the planter to ensure good singulation is achieved. Use graded seed to make sure accuracy is accomplished for every hybrid and seed size on every hectare. A 2.18t/ha yield loss due to average spacing accuracy equates to $65,400 lost revenue @ $150/t across 200 hectares. 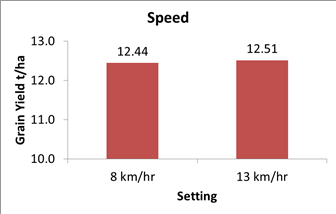 Planting Speed can be increased if you have a planter equipped with SpeedTube or similar technology, but there are a few factors to keep in mind.

In our trials, we did not see a significant difference in yield at the two planting speeds. Therefore it is possible to plant at higher speeds and obtain an even emergence. This, in turn, will enable you to plant more hectares with the same equipment and get the crop planted at the optimum time.

Tip: Evaluate your total planting system when making the jump to higher speeds.

Mark Moore, Agricultural Development Manager
Mark is involved helping organize the Crop Tour program in Eastern Europe and is very familiar with demonstrating the agronomic value of using technology, having managed the agricultural activities on AGCO’s Future Farm in Zambia for the past 6 years.