Over the past three years AGCO has conducted on-farm research at over 24 locations throughout the Midwest Corn Belt in the United States and seven sites in Russia, Ukraine, Germany, Switzerland, and South Africa comparing planter settings and their effect on corn growth, development, and ultimately yield. Summary yield results presented are from the U.S.A. corn trials.

Over the past three years AGCO has conducted on-farm research at over 24 locations throughout the Midwest Corn Belt in the United States and seven sites in Russia, Ukraine, Germany, Switzerland, and South Africa comparing planter settings and their effect on corn growth, development, and ultimately yield. Summary yield results presented are from the U.S.A. corn trials.

Uniformity of emergence and spacing uniformity were two key factors we looked at in our research. Corn is very susceptible to competition, even from itself. When plants emerge late, even one to two days, those plants become disadvantaged compared to the rest of the field. In a hand harvest trials, we found that plants emerging two or more days late yielded 20% less than those plants that emerged first. In a 200-bushel-per-acre yield environment, that’s a 40-bushel-per-acre loss. Observationally we saw that plants that are one leaf collar behind by V6-V8 growth stage most likely produce an ear roughly one half the size of its neighbors, and plants two or more leaf collars tardy will produce no ear. Similarly, when plants are planted too close together (doubles), ear size is reduced due to competition. Even more damaging is when a plant is missing altogether (skip), since the absence of the plant contributes zero yield. The loss of 1,000 plants per acre equates roughly to a loss of 7 bushels per acre. 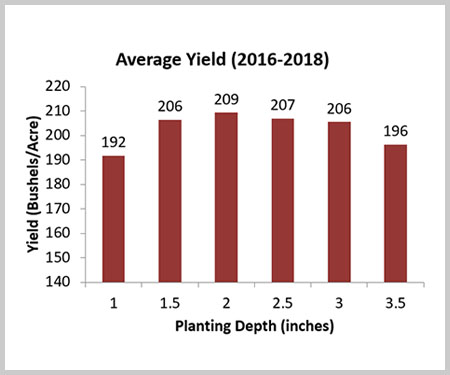 #1 Planting Depth is critically important to achieve uniform emergence. Planting shallower than 1.5” led to a significant yield loss. The reduction is due to inconsistent moisture uptake into the seed leading to uneven emergence. Also, planting shallower than 1.5” can lead to poor nodal root formation, reducing root mass and subsequent yield. Conversely, planting excessively deep can cause emergence uniformity problems, especially with early planting dates due to slower growth the plant is experiencing at that time.

Tip: Be sure individual row units are calibrated and adjusted to plant a minimum depth of 1.5” and then into adequate soil moisture to maximize emergence uniformity and yield.

#2 Downforce Control is something that is often neglected, with few agronomists understanding how critically important it is. Too little downforce and the row unit will bounce leading to uneven depth control. Too much downforce and roots can be restricted, leading to a root system that follows the seed trench.

We learned several interesting things during the three-year study that suggests downforce needs to be a fast acting dynamically controlled system. Following is a list of factors we observed that requires downforce to be variable, not fixed: soil texture, soil moisture, planting depth, row unit position on the planter bar, tillage system, accessories like coulters or row cleaners, and planting speed. It was interesting to learn that higher planting speed requires more downforce to maintain uniform seeding depth. 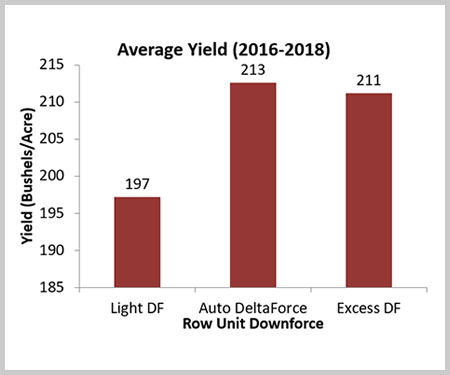 Our three-year research results compared three down-force settings. Light down-force mimicked lighter weight row units and standard duty single springs. Heavy down-force was comparable to a heavy-duty no-till spring system set in the highest pressure setting. DeltaForce, the automatic downforce system, operates automatically, precisely regulating downforce along every foot of the row. Our study proved that it is much more detrimental to have too little downforce than too much. The small difference between excess and automatic was surprising since we very commonly could find constricted root systems in the excess downforce setting. 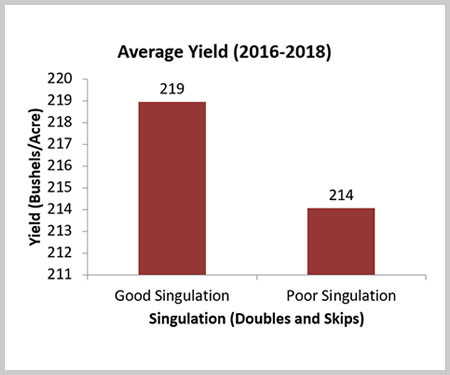 #3 Seed Spacing Uniformity has been in the farm press for the past 20 years as the benchmark of planter performance. While seed spacing is important for corn, it is only one of the many factors that need require our attention. Our research was a bit different than prior studies. In our studies we maintained the target population factor by ensuring we created as many doubles as skips by purposefully drilling two additional holes and plugging two pre-existing holes on the seed disk. The modified seed disk averaged 93.3% poor singulation vs. the control at 99.6% good singulation. The three-year study proved that yields improve as singulation accuracy improves by and subsequently spacing uniformity.

Tip: Be sure to know how accurate your singulation and spacing is. Check planter systems to make sure accuracy is achieved for every hybrid and seed size on every acre. A 5-bushel-per-acre loss due to average spacing accuracy equates to $8,750 @ $3.50 corn across 500 acres. 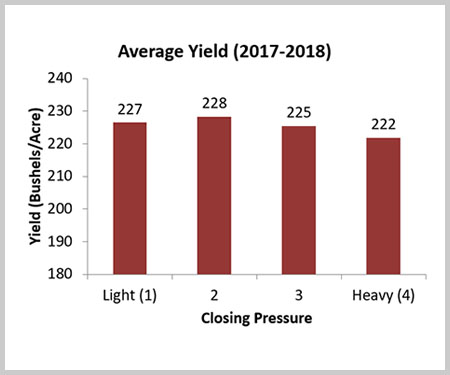 #4 Closing System should be set aggressive enough to uniformly close the seed furrow, but not so forceful that compaction over the row occurs. In our research, which was mostly in tilled soils, the first or second setting was sufficient to close the seed furrow consistently. In both years that we studied the closing systems, the most aggressive setting reduced yields. While this was true in our studies, a no-till system in certain soil types may require increased pressure to close the furrow. Closing wheel alignment and wheel spacing are also critical.

Tip: Seed-to-soil contact to ensure uniform moisture uptake and subsequent uniform emergence is essential to maximize corn yield with the planter pass. Set your closing system to achieve that goal. 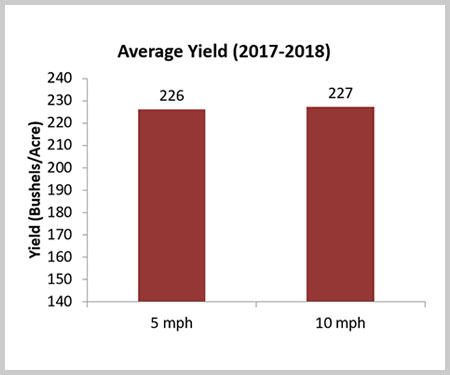 #5 Faster Speed to take full advantage of the optimum planting window is not an issue if you have a planter equipped with SpeedTube or similar technology, but there are a few factors to keep in mind.

If these factors are considered, it is possible to maintain spacing uniformity, uniformity of emergence and hit the narrow spring planting window at higher speeds. In our trials we did not see a significant difference in yield at the two planting speeds, as our planter equipped with DeltaForce and SpeedTubes maintained the same 99.6% seed singulation and spacing accuracy at both rates.

Tip: Evaluate your total planting system when making the jump to higher speeds.

For more information on Crop Tour Research Results including photos go to: https://myfarmlife.com/category/crop-care/agco-crop-tour/

The AGCO team would like to thank our farmer cooperators and dealers that have made these trials possible.