AGCO helped conduct AGCO Crop Tour 2017 in Russia to share best practices on the farm according to a specific plot protocol, which included studies focused on the importance of even emergence, precise depth control, proper downforce, and highly accurate seed singulation and spacing. People from all over the country came to Rail Fakhrislamov’s farm to learn about agriculture.

The event, which showed the use of strip-till and no-till, also demonstrated the yield-increasing effects of equipment, such as the Challenger 9108VE Series planter and associated Precision Planting® components. Fertilizer banded with strip-till, or applied with the planter at different rates, also was studied, and growers had the chance to review different hybrids and varieties for both corn and sunflower offered by Syngenta.

Overall, the Russian Crop Tour was similar to events AGCO held in the United States last year and in 2016. Nearly 300 farmers attended the Crop Tour at the KB farm. Four AGCO dealers brought their customers, while one dealer, Matrix Universal, sponsored the event. Scientists and agronomists from the United States, Denmark, the Academy of Sciences of the Republic of Bashkortostan and the Bashkir State Agrarian University took part. 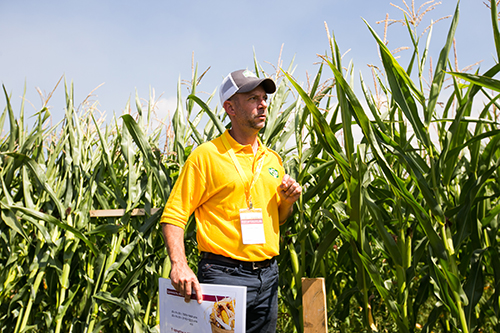 Part of Fakhrislamov’s credibility arises out of what he’s been able to do in a region where farming is difficult and margins are slim. “His farm,” says Darren Goebel, director of global commercial crop care at AGCO, “is located in a very challenging region, where the cards are stacked against you. There’s inadequate moisture, a short growing season and soils that need help to recover. Still, through innovation and technology, KB farm, with the help of Rail and a strong leadership team he’s put in place, is doing well.”

This Crop Tour event, like those that took place in the United States, gives farmers a chance to see the agronomic benefits of the plant-machine-soil interaction, according to Goebel. “Crop Tour is a very important platform for exchanging experiences. It gives farmers around the world a chance to evaluate different technologies under actual field conditions and, more importantly, the results of their implementation,” he says.

You can read the entire story about AGCO Crop Tour 2017 in Russia and learn more about Rail Fakhrislamov’s farm in the Spring 2018 issue of FarmLife, available March 15.